Want to Work With Us?

The longhouse is a type of long, proportionately narrow building built by peoples in various parts of the world including Asia, Europe, and North America.

Many were built from timber and often represent the earliest form of permanent structure in many cultures. Types include the Neolithic long house of Europe, the stone Medieval Dartmoor longhouse which also housed livestock, and the various types of longhouses built by different cultures among the indigenous peoples of the Americas.

In North America two groups of longhouses emerged: the Native American/First Nations longhouse of the tribes usually connected with the Iroquois in the northeast, and a similarly shaped structure which arose independently among the indigenous peoples of the Pacific Northwest Coast.

Longhouses were the traditional homes for many of the farming tribes of American Indians that lived in southern New England, New York, Pennsylvania, and New Jersey. The Iroquois people of upstate New York were among them. To the Iroquois people, the longhouse meant much more than the building where they lived.The longhouses inhabited by the Iroquois were wood boards/bark-covered structures of standardized design “in the shape of an arbor” about 6 to 7 metres wide providing shelter for several related families.

The Indigenous peoples of the Pacific Northwest Coast built their houses facing the ocean, using cedar wood. Tribes along the Pacific coast with a tradition of building longhouses include the Haida, Tsimshian, Tlingit, Makah, Clatsop, Coast Salish, and Multnomah people.

In South America, the Tucano people of Colombia and northwest Brazil traditionally combine a household in a single long house. The Xingu peoples of central Brazil build a series of longhouses in circular formations forming round villages. The ancient Tupi people of the Brazilian coast used to do this as well. The Yanomami people of Brazil and Venezuela build a round hut with a thatched roof that has a hole in the middle, called shabono, which could be considered a sort of longhouse.

Vikings lived in a long, narrow building called a longhouse. Most had timber frames, with walls of wattle and daub and thatched roofs. Rooms were partially set off; one end of the longhouse might be used as a barn to keep cattle and horses in the winter as well as storage for crops and tools.

First Pac West continues the tradition of building the longhouse, a proven social structure that is healthy and friendly to the earth and its people. 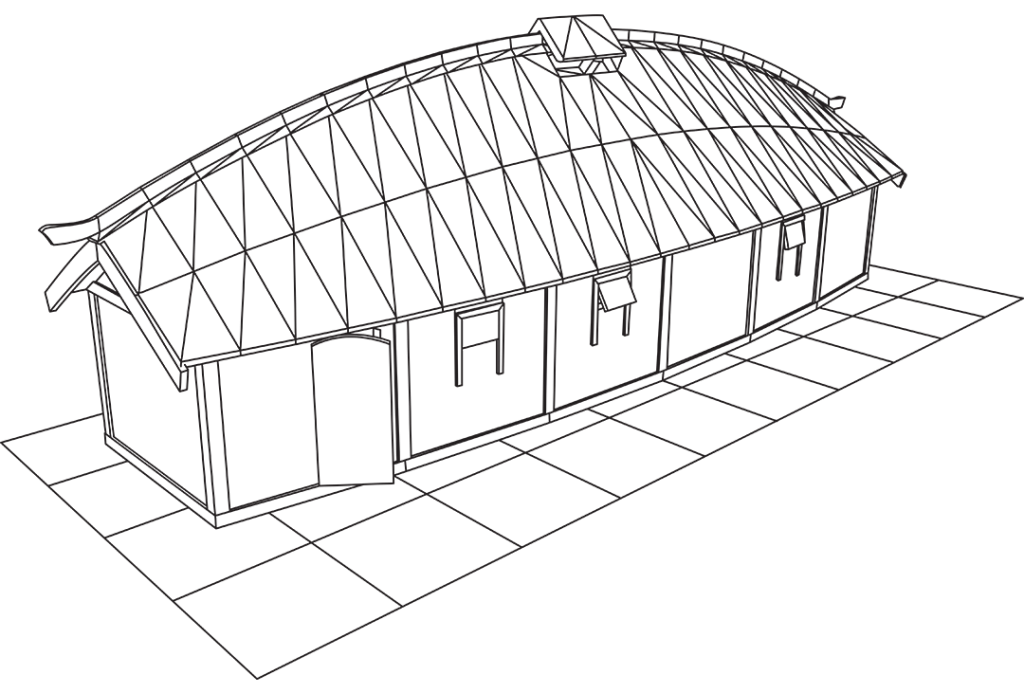